I did a double-take this morning when I opened my weekly email from Weight Watchers. Marie was smiling up at me and I hadn't even signed into Blogger yet. Now, I've already read Marie's success story, but if you haven't you should. Then check out her blog - this chick rocks the maintenance world.

When Marie looked at her younger brother John, who she always admired athletically, she thought, “Why can’t that be me?” Her transformation has been gradual but full-blown. Since losing weight, she’s run three 5ks, a 10k, a 10-mile and two half-marathons.

It's the week after Thanksgiving. A few things have been bopping around in my head today. Colette is upset because she only lost 0.4 lbs. I do feel badly for her, and she's had stresses I don't want to even think about. I've also been thinking about those who will show up at meeting tonight and will have gained or not lost what they would expect to. The fact that they'll be there is huge - it's always those who don't press the re-start button who need worrying about.

I've been thinking about 'Failure' and how it's such a vital part of overall success. I'm participating in a Goals Challenge right now and 'failure' was todays topic. Failure is an important part of overall success. Think Thomas Edison, who was called stupid by his teachers. Fred Astaire who was rejected because he was balding, couldn't act, and could only dance a little. Lucille Ball who was told she was too shy to act. What gives you the right to think you can't lose weight? The program works if you work the program.

As for small losses or gains - I've had my share. The difference? I view 'failures' as opportunities for growth. I always evaluated my small losses or gains and tried to be as honest with myself as I could. Problems in life? They don't define you. It's what you do to over-come them that matters most.

Small loss? Small gain? This is a little something acquired from Weight Watchers written by one pound of fat. I hope you enjoy.

Hello, do you know me?
If you don’t, you should.
I’m a pound of fat,
And I’m the HAPPIEST
pound of fat that you
would ever want to meet.
Want to know why?
It’s because no one ever wants to lose me;
I’m ONLY ONE POUND, just a pound!
Everyone wants to lose
three pounds, five pounds, or fifteen pounds,
but never only one.
So I just stick around
and happily keep you fat.
Then I add to myself,
ever so slyly, so that you
never seem to notice it.
That is, until I’ve grown to
ten, twenty, thirty or
even more pounds in weight.
Yes, it’s fun being ONLY
ONE POUND OF FAT,
left to do as I please.
So, when you weigh in
keep right on saying,
“Oh, I only lost one Pound.”
(As if that were such a terrible thing.)
For you see, if you do this,
you encourage others to keep me around
because they’ll think I’m not worth losing.
And, I love being around you –
your arms, your legs, your chin, your hips
and every part of you.
Happy Days!!
After all, I’m
ONLY ONE POUND OF FAT!!!

Posted by Candace MacPherson at 11:18 AM 5 comments

Yes, I forgot to say Happy Columbus Day to my American counterparts. Well, it's been an interesting Thanksgiving. And boy, am I glad to be a Weight Watcher today!

Last year I thought I was prepared for Thanksgiving only to record a stellar gain that week. It took me a few weeks to get back on track. It was frustrating and I felt out of control.

This year, I planned. This year I did some things differently.

We still went to the in-laws and no, I wasn't able to get at the vegetables before cheese, butter and milk were added. Oh well, you can't win them all. I also indulged in desert food - but don't worry, it was Pumpkin Angel Food Cake. I also left some behind for others. I bought a box of biscotti's. These babies are sinfully awesome - and check out that NI.

Walking - my 10 year old and I went for a few walks this weekend, plus one before dinner and one after.

Veggie tray - They were on sale on Sunday, so I bought a small veggie tray for supper that night, a large fruit tray for breakfast in the morning and a large veggie tray to take to sil's. I ate some veggie's before dinner was served and felt quite full after only 1 plate.

Drinks - no wine this year. I had to work the next day anyway, so I brought some Live Active Crystal Lite and sipped on that while others were having beer and white wine.

Desert - My niece turned 19, so we didn't serve traditional Thanksgiving desert. Instead they brought out a DQ Ice Cream cake. I did have a small piece. After all, I'd already had a fair bit of yummy pumpkin angel food cake.

Other exciting weekend stuff. I'm still plugging away on decluttering my home. All 4 of us participated in a 27 fling boogie. The 5 yo was having some issues, but did part with a few toys and some clothes. We ended up with a full bag for donation, a full bag for the garbage and a partly filled recycle bag for paper. We're doing it again this weekend.

Oh, and results. I did weigh-in last week and this week and stayed the same. Exactly. The. Same.

Posted by Candace MacPherson at 8:14 AM 2 comments

I think Debbie is getting a little frustrated with the long haul of weight loss. She hasn't even reached maintenance yet and is getting tired of the trudge. Ummm, Debbie - let's put the scale away for a while and focus on what was, is and always will be important. YOU!
And this goes for anyone else reading this post.
What do YOU need to do to live the life you want? Do you need to journal food or watch that comfort zone? That'll never change. Do you need to get out and walk 2-3 times a week? That'll never change. Will reaching that magic number on the scale suddenly make all of life's problems disappear? Sorry - ain't gonna happen.
I don't know exactly what YOU need to do to be happy, but I know you're the only one that can do it. I do know that storyboarding your future, making goals and doing those repetitive tasks that we all hate to do can help get you there. This works for weight or anything else your little heart desires. Whatever the mind of man can conceive and believe, it can achieve - W. Clement Stone
Debbie - YOU have lost 70 lbs. THAT is amazing. YOU are amazing.
3 Cheers and a Shout Out to Debbie 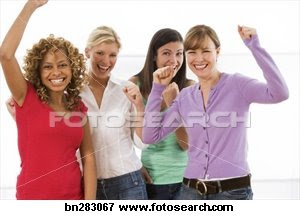 So, next weekend is Thanksgiving and www.weightwatchers.ca sent out a loverly email with lots of tips and such. What do I consider the most important thing about getting through the weekend without gaining (umm, last year was a record gain for sure). This year I plan to use some Weight Watcher tools, like proper planning and some mental rehearsing. I'm eating at my sister-in-laws, and will bring with some cranberry sauce made with splenda and maybe a low fat desert, such as this angel food cake or the pie custard on the bottom of this page.

Those not celebrating, have a great weekend anyway. Take Monday off just for laughs next week. Take care.

I was checking out some information on the net and found this thought quite interesting.

- Give yourself time to lose. This isn't a race and time-line goals are often difficult to obtain. I am always amazed at those who are disappointed because the ONLY lost 1 lb this week. Gee, I've been happy at ONLY gaining 1 lb some weeks:)

- Give yourself time to learn. Learn the program, the lifestyle, new habits and such

- Give yourself time to heal. Heal from years of self-abuse to your body and self-esteem.

The longer it takes the better the chances you have of long term success. You may also discover that other areas of your life are improving along with your weight as the lessons learned in WW are transferable to all areas of our lives. Goal setting is such an exciting **new** discovery for me.

Remember, you didn't gain all that weight in weeks or even months, so relax and enjoy the journey. Give yourself time.

It's not the pants.

It's not all about the pants size. But since you're asking, a size 6 would be nice. When I first started Weight Watchers, I wrote that I would be happy with a size 12. Since then I've been into (and now out of) size 8's. And now some 10's are getting snug. So, some mini-goals are in order:

This can't be done with food alone, but the brownies may need to hit the highway for a while. No - we need to re-embrace exercise. Just the same as a house can't be built without a hammer, this next stage can't be done without exercise. I'm very fortunate to have phit-n-phat and the fearless Queen leader, Corinne in my corner. I can do this and am inviting you to join me on a new and exciting journey...to thin.

Candace MacPherson
I'm a 40 year old wife and mother of 2 girls, aged 11 and 6. I joined Weight Watchers on May 23, 2007 at 186lbs and shortly after began to blog about my journey to thin. In the fall of 2008 I began leading a WW meeting once a week and love how it keeps my head in the game. My members are a really good group - I hope they all succeed in finding hope, perspective, and the them they're meant to be.